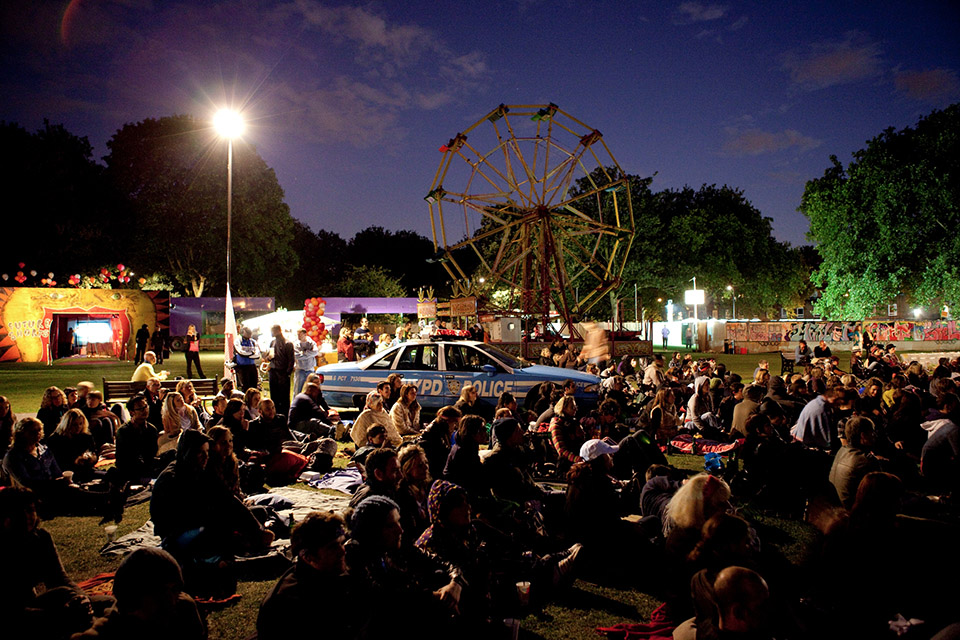 The only large-scale cinema event was back in June 2010, showcasing a new interactive way to experience the motion picture.

Newspapers are reporting that 3D TVs will soon be the norm. This seems like a bizarre concept; just imagine snuggling up on the sofa with your 3D glasses. It would seem that Avatar had a much bigger impact on our lives than originally anticipated. We live in a demanding world, in both work and pleasure, there is an overwhelming sentiment that mediocrity has gone out of the window, and audiences are looking for more. Today’s entertainment is about the immersive, sensory and interactive experience.

The Secret Cinema is a revolutionising project, which is transforming the traditional cinematic experience. Set up by Fabien Riggall (b. 1975) of Future Cinema in 2007, the Secret Cinema is the first large-scale interactive cinema. Followers must sign up via Facebook and Twitter and then a few days before the event the secret venue is revealed. Attendees purchase the tickets without knowing the film or location, Riggall cleverly mixes suspense with drama and the film is only revealed upon arrival. Riggall is doing something vastly important, he’s creating a communal experience without an overriding premise, almost breaking down social barriers and debunking stereotypes. People love film and excitement, which is clearly provided by the nature of these events, but it doesn’t matter if you’re a city banker or a primary school teacher, the point is interaction not only from Riggall’s crew, but strangers who might not normally mingle.

With just over 35,000 fans on Facebook, Secret Cinema is developing a cult following, and it begs the question, is escapism the key to surviving in the modern world? Featuring live performers, DJs, cutting edge multimedia, music and even acrobatics, Secret Cinema is rewriting the rulebook on the motion picture experience. This type of large-scale event could only be arranged by the uber-creative. Riggall is by extension a character. He’s a dreamer, but also pro-active. He enthuses: “People want to be challenged and inspired. They want to have an experience, when they invest; they want to be part of something that will entertain them in a different way. People want to develop a personal experience and relationship again, for example, if you look at the way we buy music today. When I was a kid I bought records, there was an experience in buying that record, going to the record shops, meeting the characters at the record shop, the smell of the record shop, and the whole feeling. Now, it’s all digital, it’s online, it’s virtual, and you don’t meet people anymore. I think people are desperate to meet one another. What I love about Secret Cinema is the way it can bring people together in a more social and connected way. The audience is a mixed group of people, and they like the fact that they’re ending up in a place with lots of people that they might not have ended up with, and watching something that they might not have normally seen. It’s really a special atmosphere.”

Secret Cinema was born through serendipity. One of Riggall’s friends was running a club night, and she asked him if he’d be interested in putting on a film night. The resultant evening set the stage for Secret Cinema, Riggall comments: “In that environment, which was essentially like a gig in a small venue, 150 people attended. We showed a collection of short films, music videos, and then we had a DJ afterwards, and that’s really where it kind of started; with the feeling of an event as a social experience. People were talking and they were discussing the films, it provoked quite a lot of debate and it was an interesting night, where I discovered that, in the same way that I used to make mix tapes for friends, I had a talent for mixing films, in putting together a series of different stories, in an unusual and different way.”

Return to 2005, when Riggall founded Future Shorts. He has a particular penchant for the ultimate experience, much like a thrill-seeker, but through the genre of film and performance. He had this idea of creating a network of film festivals, and with 13 countries on board and 80 cities, it’s something of a phenomena. The films are screened in unique venues, opening up the idea of cinema being more than just a visit to the multiplex with the teenager full of angst selling you popcorn, Riggall says: “In Finland we projected the films on an ice block, in Latvia we did it in an old Soviet naval ship, in Berlin we did it on the river, so people swam and then saw the films. And the idea really is, a film festival is a communal experience, and it’s a place which provokes memories and inspiration.” Riggall’s quest for the ultimate experience is creating a burgeoning reputation for Future Shorts, Future Cinema and Secret Cinema, and his work is now part of the major festival circuit: Glastonbury, Latitude, Bestival and the Big Chill. With skill, expertise and creativity, Riggall’s vision is being realised.

Screening all genres and eras, Secret Cinema brings cult classics, golden oldies and exclusive preview screenings of eagerly anticipated upcoming releases. Surprising site-specific locations from five-star hotel car parks to working city farms are commandeered to evoke the spirit of the secret movie. With plaudits everywhere, Secret Cinema is fusing feature film with music, theatre and live performance; the ultimate interdisciplinary experience. With the Independent saying “it’s the best night out in the movies in Britain” and Vogue saying it “revives the magic of the big screen”, the Secret Cinema is needless to say, attracting a lot of attention. Recent Secret Cinema events have included an amazing re-creation of post-war and modern Berlin, for Wings Of Desire and a special Christmas screening of Bugsy Malone, where people took to the streets of a mocked-up Lower East Side, before taking part in a real life splurge fight. Riggall is adamant, he wants people to get up off their seats, get involved and create a relationship with the film.

Embracing new technology and social networking, here’s how it works; members must buy their tickets through Facebook, and three days before the event, members will receive an email with the location, and this location will be transformed and become part of the film. There is a set with actors, and clues to the film, every detail is in its place. Actors will engage with the audience, and sometimes the set spills onto the street or even from the nearest Tube station.

The overall experience is about five or six hours, and with DJs after the film, it’s effectively a night out. Riggall says: “What happens before the screening is really important, that’s where the real experience begins. Once the audience begin to watch the film, and throughout the film, we may bring in elements of performance, as long as it doesn’t take anything away from the film. In Wings of Desire, we had a trapeze artist, and so we just put her up there and it worked, whereas with Bugsy Malone, we stopped the film and pretended there was a gangster outbreak, and the gangsters were outside and we needed everyone to get ready for a massive shakedown and then we delivered 1000 custard pies to all the tables, gave everyone ponchos, and then we started the film. We literally replicated the film, so all the chorus girls came off the stage in the film, and we had them come off the stage at the event, and then when the gangsters came in and splurged everyone, we splurged everyone. It was kind of like they were actually part of the film, but we would never do anything for the sake of it, we would only do it if it added to the magic of the film.”

The beauty of Secret Cinema is its uncertainty. It’s a rare opportunity to go somewhere and to do something without knowing the specific details. How many times do we actually get that opportunity? Not often. Secret Cinema is a reminder, a youthful vision of the world, one where things are brought to life and the imagination is celebrated. The next Secret Cinema will take place from 15 – 20 June in London. It’s set to be the largest event to date with 150 cast, and attendees will even have to bring an umbrella. But since it’s a secret, you’ll have to go and find out for yourself. For the ultimate cinematic experience visit: 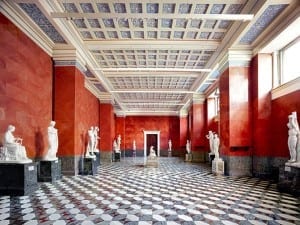 The world’s first online art fair is back with a new edition, VIP Photo. The event aims to represent a selection of photography reflecting the best in modern and contemporary art from leading galleries.