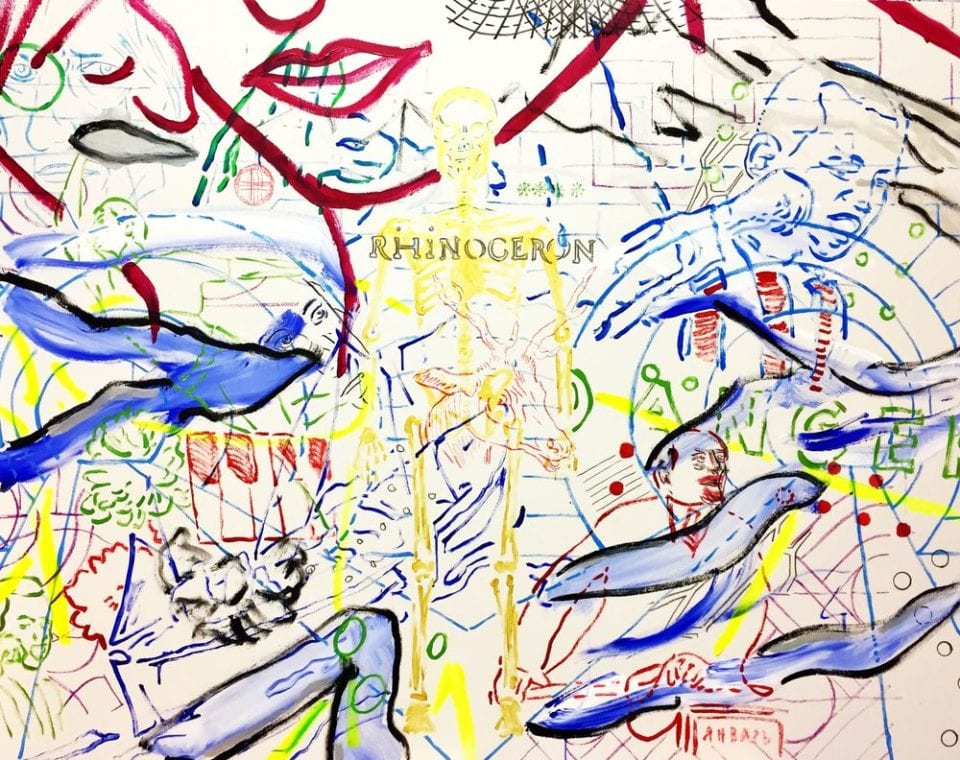 A: What do you think it means to be a transdisciplinary artist today?
ZP: Being transdisciplinary signifies having the freedom to cross boundaries and to explore concepts using variable means. What is important to me is the idea that I want to research, and I choose a medium, or rather a combination of media, that seems fitting for translating that idea into a meaningful form. So I work in a lot of different media ranging from painting, drawing, and post-digital printmaking to video, performance, photography, glitch art, to social practice. In philosophical terms, working in a transdisciplinary way (between/across/beyond individual disciplines) allows you to work around the fact pointed out by the contemporary philosopher Jacques Ranciere in his writings about aesthetics, that disciplines discipline, i.e. they not only delimit the possibility of what can be thought and said about a particular subject, but they are also actively involved in the practice of training people to obey rules or a code of behaviour, with such training resulting in highly controlled behaviour.

A: How does your cultural identity feed into your works, and do you think that this is important for artists working in a globalised world?
ZP: They say the past is another country. In my case that’s quite literally the case as I was born in Macedonia in former Yugoslavia, before the wars in the 1990s shattered the country to pieces in the name of nationalism and rigid ethnic and religious identity. The excess of history is palpable in the Balkans (Southeast Europe): it suffices to just look at the historical layers where the ruins of an ancient Hellenistic temple are replaced by a Roman temple to be replaced by a Byzantine church to be converted into an Ottoman Turkish mosque.

The experience of those early years, along with the years studying and working abroad, first in Linz and New York, then Berlin and now Hong Kong, has led me to embrace the idea of identity as something performative and inherently instable – an ongoing creative endeavour. It has also primed me for an interest in hybridity and cultural translation, and translation in general. For instance, part of the reason why feel an intense connection with the work of the Baroque painter El Greco is because, as somebody originating from the ancient lands of Byzantium and now living in Asia, I find personal resonances with El Greco’s, who emigrated first to Venice and then Spain.

As the curator Nicolas Bourriaud states in the Altermodern Manifesto, contemporary lives have become journeys in a chaotic universe, transforming it into a territory which may be travelled both in time and space. In such a changing terrain, individuals’ daily practices, as well as their sense of self, rely on constant translation and mediation between identities and cultures, an ongoing process of negotiation of cultural meanings.

This was the idea that led to the development of the project Translation(s), co-curated by myself and Laurence Wood. The project has invited 30+ international artists to consider this centreless chronotope of global negotiation and interchange between agents from different cultures as an emerging network of new pathways between multiple formats of expression and communication. Through a variety of approaches to video, they have explored the dynamic interplay between the global and the local on a concrete, material level.

A: How does the landscape of Hong Kong feed into your practices (if at all)?
ZP: I continue to be fascinated by the ever-changing Hong Kong cityscape. It’s a highly visual, filmic city, there’s a reason this is one of the most photographed on the planet. Furthermore, I’m deeply interested in positionality, what constitutes and allows for a sense of place, as well as processes and mechanisms of cultural translation and transcoding, mediating between different cultural flows.

In the project Hong Kong Atlas (2013-2016) I produced a series of urban landscapes as a form of translation of Kai-cheung Dung’s novel Atlas: The Archaeology of an Imaginary City, a book of (postmodern) fiction about Hong Kong. The project traces the featured locations onto the real terrain of today’s Hong Kong by means of a psychogeography documented in digital photographs, and is then once again transcoded into visual form as a series of mixed media works combining photography, printmaking, painting, and video. Over the past four years this project has been widely exhibited to critical acclaim, including at the 30th Biennial of Graphic Arts Ljubljana, the world’s premiere event in the field of printmaking, curated by Deborah Cullen (director and chief curator of the Miriam and Ira D. Wallach Art Gallery, Columbia University, NYC), and in a group show in New York juried by Whitney Museum curator Elisabeth Sussman, and at Art Basel Hong Kong.

The city, and urban public space in particular, has been an ongoing site of exploration in my artistic practice and in my writing as well. I’ve created a series of projects (Monument: 1000 Alexandras, City Tour of the Decade, Portrait of the Artist as a Cultural Worker, The Right to the City…) that step out of the white cube context and sought out more direct engagement with the social through the focus on public space: video works displayed on huge video billboards in Hong Kong and New York, abstract works displayed as billboards in the streets, a monument to the multitude, etc. Next year I will be involved in an urban art project in Hong Kong that I’m developing together with Laurence Wood, a UK artist who is also based in Hong Kong, to be realided hopefully in collaboration with the Hong Kong street art festival HK Walls.

A: What do you think is the relevance of the line within compositions?
ZP: I’ve always been fascinated by drawing, and to artists exploring linearity, from Renaissance woodcuts to ukiyo-e, from German Expressionism to Minimalism, and from Jackson Pollock to Yayoi Kusama. Drawing is about both economy and range, and I find that dialectic highly fruitful to explore. In the past couple of years I have embarked on several drawing-focused projects, including most notably Theoria and On the beach.

Theoria (2015-current) is a series of post-conceptual works that, so far, contains more than 70 works in total. Combining different techniques (ink, acrylic ink, graphite, lumocolor, gouache, graphite on paper, as well as silkscreen), the project is realised as a series of portraits of monumental figures from the world of philosophy, literature and art, that represent my personal beacons, from Friedrich Nietzsche and Virginia Woolf to Walter Benjamin and Judith Butler. A selection of 22 works from this series was just recently the subject of a solo show at the National Gallery in Skopje.

On the Beach (2015) comprises 88 post-conceptual drawings of famous artists, writers, ideological and cultural figures sunbathing on the beach, based on actual found photographs. By presenting these cultural icons in the moments of sensory enjoyment as well as bodily self-representation and performance before other bodies, the works research the incongruence between the cerebral and the corporeal inherent to this moment.

Three works from these two series have been featured in The Guardian: a portrait of Joseph Beuys was selected by Tate Modern photography curator Shoair Mavlian, a portrait of Gilles Deleuze was featured in Wellcome Collection curator Emily Sargent’s favourite art about human consciousness, and a portrait of philosopher Theodor Adorno sunbathing was featured in the selection of Tate curator Flavia Frigeri.

A: What artists have you been influenced by?
ZP: There’s an ever-expanding constellation of names from art history whose work I am interested in or find resonances with, creating lines of correspondence with my own, not necessarily manifestly identifiable in my own work. A whole plethora of known and unknown sculptors, painters, et al. across different historic periods and geographic regions, from Chauvet Cave paintings to Cindy Sherman, from Mesoamerican Art to Julie Mehretu, and from ancient Egypt to El Anatsui.

A: What is your favourite work to date and why?
ZP: That would be an abstract representational portrait of Marija Todorova, my wife. Not only because of the subject matter (obviously) but also because in formal terms it’s I think one of my most accomplished works, as evidenced by the fact that it was chosen for a group show in the US juried by the famous American art critic and historian Donald Kuspit.

A: What is your future research based upon and how will this affect your projects to come?
ZP: I’m currently working on several projects in various media, from painting and drawing to video and new media. For instance, I have two ongoing cycles of paintings, Apparitions and Shipwrecks. The Apparitions series explores representation through an alternative art history inhabited by spectres of famous modern icons, for example, the great Old Master of Venetian painting Gianbattista Tiepolo having a vision of Lenin appearing on the Island of San Lazzaro degli Armeni where centuries later Stalin worked as a monastery bell-ringer.

In the Shipwrecks series, the concept is mostly located at the seaside through chance encounters of neither-living-nor-dead icons of different eras of modernity, such as Joseph Mallord William Turner, who envisions Jackson Pollock’s ghost on a beach, or Sir Ernest Shackleton’s vision of Jack Kerouac. 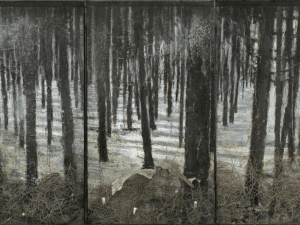 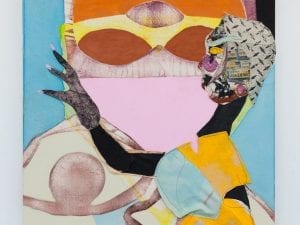 Flesh tones and bold textures bring a sense of the body into the stripped space of white walls and floor-to-ceiling windows at London’s Parasol Unit.

The Aesthetica Art Prize is a celebration of emerging and established artists. The 12 shortlisted works define a new vocabulary for life in the 21st century.