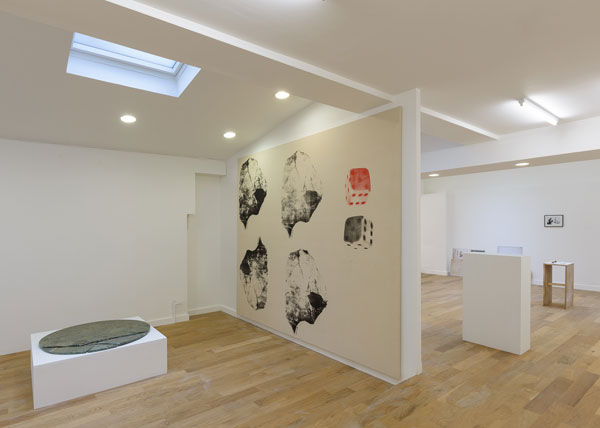 The title of the show should be understood as a pun: forbidden fruit, but also fruit that needs defending. It’s a nod towards the recent opening of the gallery itself, the fruit of some labour and enterprise. The publicity poster of the show displays a man absorbed in the art of picking dice off a tree into a basket. As the mysterious fruit of chance, the dice cube symbolises the opposite to the chess piece with its notions of control and calculation. Although it does not appear to the viewer immediately, luck and transgression permeate this exhibition from start to finish.

The show assembles a collection of serendipitous works, objects and techniques which depend at least in part on fortuitous felicity. The poster’s photoshoped collage of a man picking forbidden dice-fruit in dungarees framed just below the buttocks also happens to coincide emblematically with France’s heated debate surrounding the forbidden fruit of gay marriage, a meaning which may not be intended but which the artist would not disbar, knowing his love of that which eludes the artist’s controlling hand.

The die seems to dice with death in a work that greets you at the entrance to the show. A massive, green-tinged, circular marble slab lies shattered at the edge by one of Maire’s little cubes of chance. This minimalistic installation sculpture infuses the marble with a pleasingly broken biscuity look, conversely endowing the die with the weight and force of a miniature meteorite. The fractured marble slab is also self-referential in that it adumbrates the role of the unexpected in the sphere of the perfectly rounded well-made, man-made artwork.

The silk-screen entitled Two Tools depicts another set of Maire’s fetishist dice alongside primitive obsidian spear heads. The dice images have been dirtied and weathered so that they look as ancient and rough-hewn as ancient stone or bone. In aesthetic terms, this works well in homogenising two essentially disparate kinds of objects to open the possibility of a common ground, the most explicit (and perhaps only) implication being that happenstance can be employed as a tool that forges art and life in equal measure. A photograph entitled Organon displays Maire’s love of letting go and allowing chance to loom as large as possible: it portrays an actress who was asked to assemble a series of shapes in any order she chose.

The photographs at the exhibition are deliberately undramatic, in contrast to the aerolithic dice sculpture and the silk-screens in which the dice are magnified and modified. This low-key presentation is emphasised by retaining the photographs in their plastic wrapping, after the pleximontage technique has been applied. The support is left deliberately uncut, leaving the work both uncentered and unpolished. To further this unfinished effect, the photographs are not pinned to the wall but allowed to rest on deliberately jerrybuilt bases, giving the whole exhibition a feeling of make-do precariousness much savoured by an artist in touch with the random, makeshift quality of existence. Various surrealistic assemblages of “impossible objects” called weapons link this exhibition to its London counterpart now showing at the David Roberts Art Foundation, on until 11 May.

The variety of techniques and motifs displayed in the Paris exhibition bear witness to the protean concerns of this aesthetically restless Jack-of-all-arts. They also leave you hankering for what most artists attempt to do, exploring a single method and a single theme repeatedly. The risk that many artists run is of foundering in the formula forever. The dice roll Benoît Maire takes is greater both in commercial and aesthetic terms: the risk of artistic promiscuity, that is to say the letting go of an idea before it has yielded all its potential. 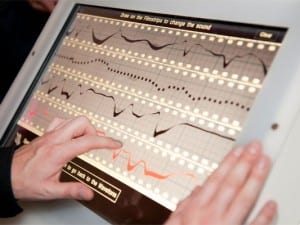 Electronic music is unavoidable in modern society, we hear it constantly pumping out of clubs, cars, bars and on the radio every single day. Science Museum examines the roots of this now wide-spread music. 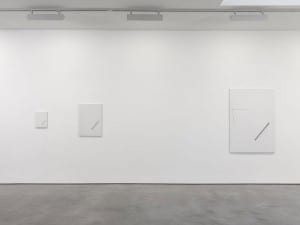 Florian Pumhösl’s minimalist triptychs are available to explore once more at Lisson Gallery. Made up of a series of three plaster panels progressing in size, these works create an abstract visual language.

The Kate Moss story unfolds in 40, a collection of work by Russell Marshall that celebrates one of the most photographed, enigmatic icons of the time and inspires conversation about celebrity culture and Kate Moss-mania.