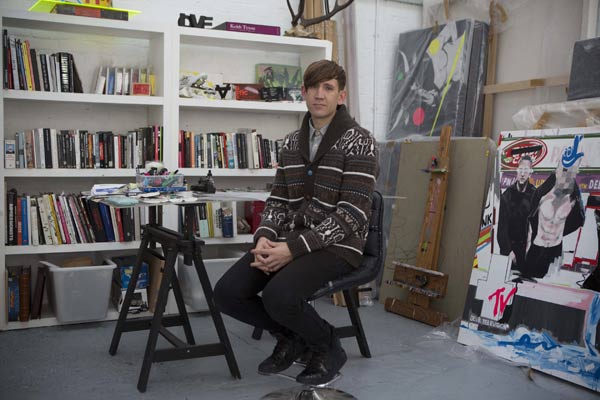 Artist, and now fashion designer, Stuart Semple, has utilised his artistic eye to create a cardigan, in collaboration with Aubin & Wills. Built upon the memory and close relationship he had with his Grandad, Semple’s newest piece has history and thought sewn into each seam of the cardigan. The piece even has deep pockets to replicate how Semple’s Grandad stored his supply of tissues. Semple came to prominence back in 2000 when he made his distinctive social commentary drawings available on ebay. Since then Semple has featured in many major international exhibitions, including his large scale canvases and installations. Semple has even also featured on the cover of Aesthetica back in 2008 discussing Mashups, an exhibition he curated that sought to make sense of the complexities of mass culture. Semple talks to Aesthetica once more about his journey into fashion designing.

A: Obviously first and foremost you are an artist, what drew you to a collaboration with fashion?
SS: I’m always an artist, from the minute I wake up to the minute I go to sleep. That doesn’t change because I’m thinking about fashion. There’s as much heart and love in this as any painting or installation. Clothing can be very democratic and accessible. I like cardigans, I’m a big cardigan wearer and I like the idea of a piece of my work that can keep people snuggly over the winter. When was the last time you got cozy in a Damien Hirst? I make my art for other people and a lot of people like cardigans. Really I’m very interested in fashion, the boundaries are always being pushed and it’s an innovative area, I don’t think art should be excluded from that arena, you can’t judge a work f art purely on the medium it manifests itself in. In a lot of ways it’s a new thing for me, the pattern is pictorial in a way, almost representational, kind of drawing, then there’s a sculptural aspect, but then it has this added dimension of functionality that I like.

A: You name your Grandad as the inspiration for your cardigan, why was that?
SS: I don’t know where to start, my Grandad was really my best friend, when I was growing up I was very lonely and he really understood me. We would confide in each other, he’d tell me stories of the war and what he’d been through. I’d tell him what was happening with me. We used to make things together, they weren’t art, I suppose they were craft. Bird tables, clocks, weather vanes, chess sets, magic tricks. I painted them afterwards and he was encouraging. They weren’t lofty things but in a way they were arty things, they were honest and ours and they meant a lot to me. I used to help him plant the seeds in the garden every year for tomatoes and runner beans. All these things are referenced in the pattern of the cardigan. I’ve put a set of seeds in each pocket and the label has a drawing on top of a photo of my grandad and I with the song he used to sing every morning. I just really miss him and I’ve been looking for a long time to make something in his memory.

A: Do you find that friends, family and personal experience often inspire you?
SS: Absolutely, you can’t shake off what you’ve lived through. Those things make us who we are. I try desperately to make art about the world outside me, but no matter what I do it ends up somehow to have me at the center of it, if I’m totally honest, most stuff is some kind of self portrait. I think people affect us more than things and quite often in deeply emotional ways, I need art sometimes to make sense of that and give it a bit of distance.

A: What sort of future projects do you have planned?
SS: In a lot of ways really more of the same, I’m in the studio and I’m working night and day on a new series of paintings, I’m struggling with them but something is happening, slowly. So when they are more solid there will no doubt be a show. I’ve been thinking about a couple of public art projects that I am praying will see the light of day, but one never knows with these things. I’m collaborating a lot with the band Officers, we just did an art video together with Gary Numan, and we’ve got some fun plans for halloween so I’m very excited about that coming out. I enjoyed making the knitwear with Aubin & Wills so much and I’m really pleased with the cardigan. That has sparked a whole load of ideas for fashion things, so I imagine there might be more of that too. I’m spending most of my days drawing and painting.

Stuart’s cardigan is available at Aubin & Wills for £165 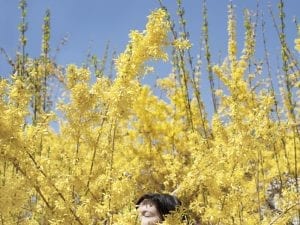 As part of Photo London 2018 at Somerset House, Huxley-Parlour, London, celebrates the work of females behind the lens. 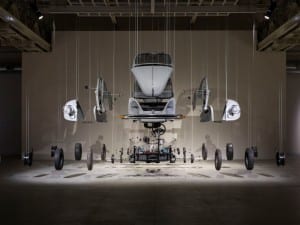 Casino at Hangar Bicocca, Milan, is the first solo exhibition in Italy by Damián Ortega. 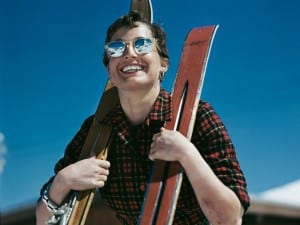 Recently presented at the International Center of Photography, Capa in Color presents Robert Capa’s colour photographs to the European public.