“You have been here before” reads Laure Prouvost’s oil and collage on panel outside Lisson Gallery’s booth at Frieze London. Amongst the dizzying diversity of contemporary art on view, it is this small piece that questions the present, past, and situational context – much like the greater themes pulsing through this year’s fair taking place in its seasonal home of Regent’s Park. As always, there is a lot to take in, or try on, such as at Oslo gallery’s VI, VII mini atelier in the Frieze Focus section where artist Than Hussein Clark measures immodest fair-goers for their very own custom couture in a collaboration with Studio GAN. It is a nod to Paris in the 1920s and 1930s, in its grungy or golden days, in whichever light you see it.

Then, there is the curated exhibition by Alison Gingeras, entitled Sex Work: Feminist Art & Radical Politics, with presentations by nine female artists. Unfiltered and frank, this section highlights post-1960s work that was previously censored, even once confiscated by major institutions. As pioneers of feminist art, their work shows a rawness that is hardcore, a voice that is illicit, and phallic imagery ranging from intentionally fearful to fun. All of it demands attention, but the cacti sculptures with vibrant pink dildos by Viennese artist Renate Bertlmann are almost too on-trend with Instagram-crazed new-wave feminists and cactus lovers alike. Blatantly explicit, the shock effect level of these sexually-charged works is arguably challenged when against counterparts in the fair that are also politically and socially fuelled.

Frieze Artist Award winner Kiluanji Kia Henda merges the cult of Marxism-Leninism after Angolan independence with the drawn parallels between witchcraft practices during Angola’s civil war and science fiction narratives used by Cold War superpowers. Politics, fantasy, and religious correlations fuse into a powerful two-part installation and performative piece by the Luanda-based artist that will change throughout the duration of the fair. Also in the winner’s circle is São Paulo gallery Galeria Luisa Strina for best stand.

At first, the stand appears as if it is a bohemian dream with the star piece being a beautiful wall-tapestry-like textile curtain. However, up close, Alexandre da Cunha’s installation Kentucky (Biombo) is actually made up of mop heads. With backdrops at the forefront, Travesía Cuatro’s presentation featured stencilled wallpaper by Charlie Billingham which stood out as much as the pieces by Mateo López, Gonzalo Lebrija, Elena del Rivero, and Jose Dávila on show against it. Juxtaposing works makes sense when cherry-picking the most commercially viable options to show at Frieze. Hauser & Wirth chose professor Mary Beard to put together their little faux-museum, wittly showcasing contemporary and modern bronze pieces with a twist on the expected artefacts as well as the old and the new. At Marian Goodman’s booth, Giuseppe Penone’s marble and bronze sculptures resemble trees that overlook the central pool by Cristina Iglesias with its tranquilly flowing water appearing as a tiny oasis amongst the artificial.

At Modern Institute, Jeremy Deller’s Do Not Eat Octopus graphically conveys an environmentalist outlook. Plant-friendly and brightly positive, Anton Alverez’s ceramics at Salon 94 are as inviting as Do-Ho Suh’s Main Entrance at Victoria Miro’s stand. Although underlying serious subject matter may reside within many of the artworks at Frieze, whether drawn from the past or highlighting today’s topics, this year’s fair is a vast reflection of societal truths, if not satire. 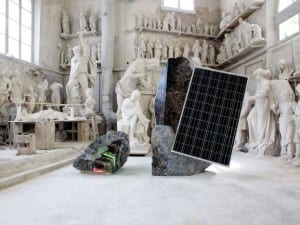 Frieze London returns to the capital for its 13th edition from 14-17 October. Taking place at The Regent’s Park it provides an astute and fresh perspective on contemporary art. 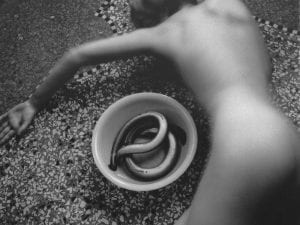 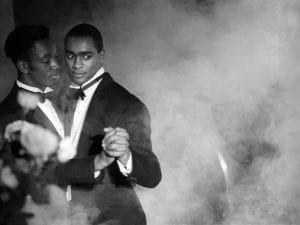 Isaac Julien’s Looking for Langston (1989 / 2017) is a landmark film that explores the private world of poet, social activist and columnist Langston Hughes.