UK theatre company Forced Entertainment present the UK premiere of their new performance, The Notebook, as part of After a War in the festival LIFT. A festival of international theatre and performance, LIFT transforms the city into a stage for artists to bring radical and inventive stories from their own countries to London. After a War is co-curated by Tim Etchells and Mark Ball and brings 22 artists from across the world to the Southbank Centre and Battersea Arts Centre to reflect on the lasting shadow of World War I and contemporary issues of war and peace.

The Notebook is Forced Entertainment’s contribution to the programme. A new performance based on Ágota Kristóf’s award-winning 1986 novel of the same name, it’s the first time the group have adapted a novel for the stage. It tells the story of twin brothers evacuated to the Hungarian countryside during World War II, to stay at their impoverished grandmother’s farm. The unnamed narrators are social outsiders, surviving in and understanding the world by a harsh private code. Though strange and dysfunctional, the brothers are slowly revealed as struggling moralists, trying to live by consistent principles in a Central Europe crumbling into vice, cruelty and opportunism.

The language is compelling and the humour dark and subversive, mining the context of wartime hardship and concerning itself with questions of personal ethics and politics in the wider context of war. Directed by Tim Etchells, Forced Entertainment performers Richard Lowdon and Robin Arthur stand side by side to tell the twin’s story in an unsettling and uncanny double-act narration of two people trapped in one voice and one shared perspective. Although not twins themselves, as long-time performers for Forced Entertainment, Lowdown and Arthur have stood side-by-side on stage for more than 30 years.

Subsequent to the show at LIFT, The Notebook will embark on a European tour, heading to Latitude festival, Sheffield, Brussels, Lancaster and Amsterdam.

The Bloomberg New Contemporaries has long presented art lovers with an annual snapshot of emerging talent from the next generation of artists in the UK. The first exhibition was held in 1949. 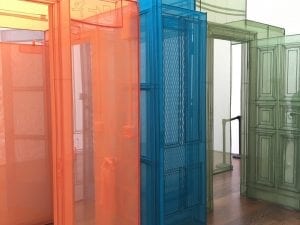 Do Ho Suh’s first exhibition at Victoria Miro was a show-stopping example of conceptual installation, communicating beyond mere visual appeal.