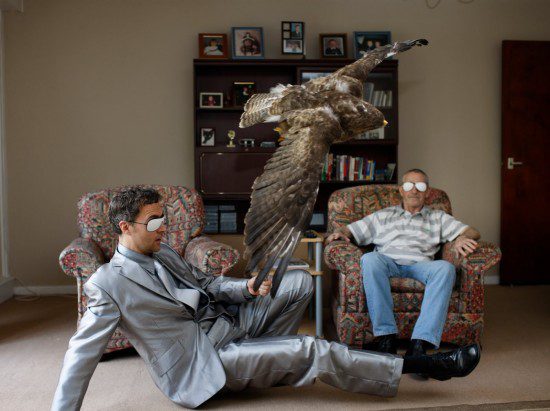 Marcus Coates’ new show Psychopomp, which open at Milton Keynes Gallery in January has been picked up several plaudits along the way with Richard Dorment of the Daily Telegraph saying that Coates is “one of the most intelligent and original artists in this country today.” Not bad, eh? I first became aware of Coates during the Altermodern exhibition last year. In fact, he graced the cover of Issue 27, so I’ve been a fan for a while now. There’s even a chance to meet Marcus this Thursday at the gallery during a “Meet the Artist” Session.

Psychopomp, has been the first survey of Marcus Coates’ work in a public gallery in the UK and will include early film pieces, sculpture, sound, costumes and photographs as well as new work.

Coates works in mysterious ways, often assuming the identity of an animal, such as a fox, goshawk or stoat, by simulating its appearance, enacting its habits and appropriating its language. In the film, Stoat (1999), for example, Coates totters around on ramshackle platforms, learning to recreate the animal’s bounding movements; in Goshawk (1999), a telephoto lens captures the artist as a rare bird perched precariously at the top of a tree; while in Finfolk (2003), the artist emerges from the North Sea spluttering a new dialect, as spoken by seals.

Coates has also trained as a shaman and the exhibition includes films of his rituals, where he achieves a trance-like state and communes with the animal kingdom to address social issues. Wearing an array of costumes such as a badger’s hide, a stuffed horse’s head, a blonde wig and a necklace of money (all of which will be on display), Coates has addressed issues including prostitution, regeneration and swine flu for communities worldwide and most recently in Israel, Japan and Switzerland.

“…I feel that my imagination can be put to good use socially, even politically.”
Marcus Coates

Dawn Chorus (2007) is a major, multi-screen installation in which human voices re-create the chorus sung at dawn by birds, including a chaffinch, pheasant and yellowhammer. Together with wildlife sound recordist Geoff Sample, Coates recorded individual birds singing simultaneously on a single morning. Each was slowed down to a human pitch, so that people could be filmed mimicking these lower and slower sounds in their own natural habitats, such as a hotel, osteopath’s clinic or even a bath tub. The films were then accelerated until people twitter like birds and their voices precisely echo the original birdsong.

In Peregrine (1999) Coates painted the feathers of this powerful predator onto the carriage of an ordinary starling. This sculpture encapsulates the artist’s exploitation of art for its magical and liberating ability to transpose everyday objects and situations into unexpected, humorous and thought-provoking contexts.

The exhibition includes works spoken in numerous tongues as Coates ultimately addresses his audiences using the universal language of the imagination to highlight the spiritual and social potential of art.

Psychopomp closes on 4 April, so don’t miss out! www.mk-g.org

NB: ‘Psychopomp’ means ‘the guide of souls’; they are creatures, spirits, angels, or deities in many religions whose responsibility is to escort newly-deceased souls to the afterlife, or to act as mediators between the unconscious and conscious realms. They have been associated in many cultures with animals, such as horses, dogs, crows and sparrows. In many cultures, the shaman fulfills the role of the psychopomp. 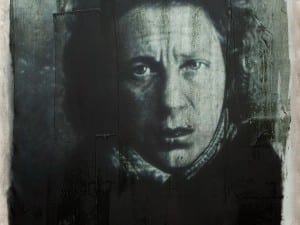 One of eight finalists, British artist John Keane has been shortlisted in the Aesthetica Art Prize 2015. Keane’s dramatic Fear paintings draw on archival images from the great Stalinist terror. 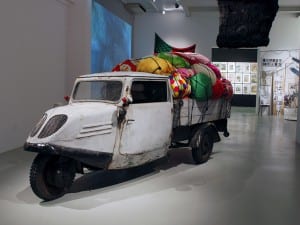 The Politics of Sustenance

The FACE Collection presents Investigations of a Dog. Using the analogy of a dog questioning the origins of food, the exhibition considers what sustains mankind in the 21st century.