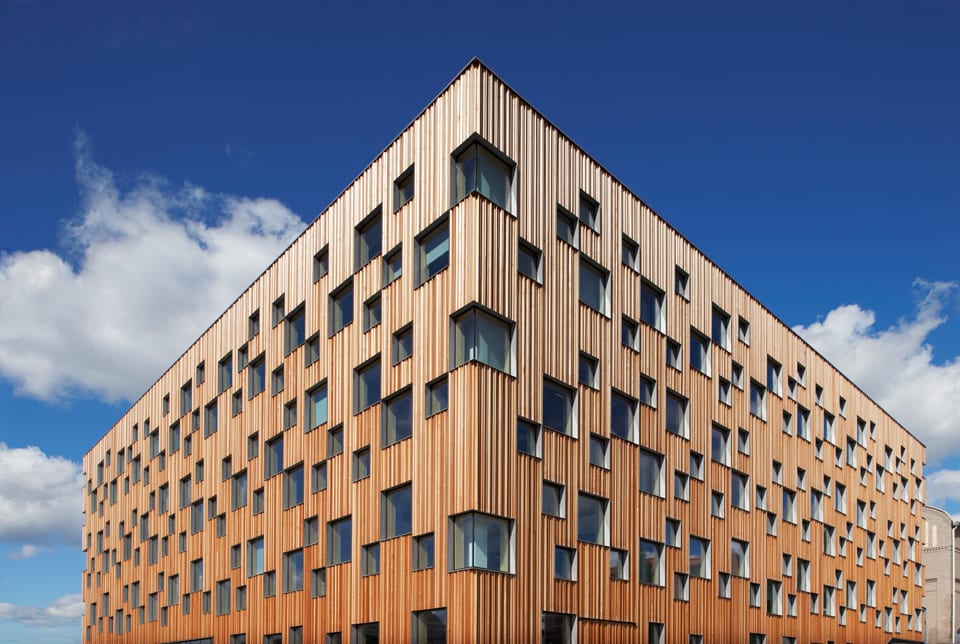 Acclaimed Swedish firm, White Arkitekter, has won a commission to build the tallest timber building in the Nordic countries, a milestone in urban development.

For nearly two decades, White Arkitekter has invested in establishing a unique research-based organisation of highly qualified experts in the field of sustainable design. The winning Skellefteå Cultural Centre proposal was chosen from 55 entries in 10 countries. Set for completion in 2019, the wood-framed 10-storey high-rise will contain a theatre, museum, art gallery, library and a new hotel, all situated  in the heart of the city of Skellefteå, Sweden. Architect Oskar Norelius states that this project demonstrates how “sustainability is more than just the environment, it also encompasses the social, economic and cultural aspects.”

Architecture firms have had to adapt their approach to urban design due to the changing nature of busy city landscapes and the fickle needs of their dwellers. The growing popularity of temporary architecture, such as pop-up pavilions, represents a demand for agile buildings to suit a variety of functions. Norelius states: “The belief that we can create a masterplan that will last for generations is an outdated way of seeing things.” The Skellefteå centre has design elements that follow this theme of flexibility of use, such as retractable walls for rooms to be expanded or divided so as to better serve the function at hand – from an exhibition to a large congress. By bringing wood back into the core of the city, this will result in a more liveable, malleable space.

Norelius expresses a belief that “the structure in Skellefteå is rational and robust, but being in wood it has an inherent warmth and human scale. By leaving the design apparent throughout the building, the spaces get the character of a culture factory, but where you can still feel at home.”

For this project, one of the challenges for White Arkitekter is to present a building that offers both robust functionality and appealing aesthetics. A key goal is to improve the appearance of Skellefteå’s city centre and hence concrete, despite its benefits, is not as appealing as the earthy appearance of timber panels. Furthermore, by using only local wood of the highest quality, the centre stands as a proud symbol of the region’s industry whilst generating an economic boost for the local suppliers. The skeleton will be left exposed throughout the building as a reminder of its origin and Swedish tradition: a foundation built from local natural resource and dedicated labour. Architect Robert Schmitz says: “In a way, I would say that we never design an individual place. We always reflect on the impact of the context, and what possibilities the building can unlock in its surroundings.” Therefore, showcasing the structure creates a candid sphere in which the public can understand the dynamics of the edifice and see the mechanics behind its thoughtful construction. The centre is designed to endure Sweden’s harsh weather with an efficient energy consumption record and a green roof that contributes to thermal insulation, noise blocking, biodiversity and rain water absorption.

The city of Skellefteå is surrounded by dense forests or thus. The region is renowned for its wooden buildings and excels in sustainable forest management – a vital component for reducing the risk of fires. The region’s timber industry creates jobs for the local community and these fine-tuned construction techniques range from traditional methods to modern technology. The choice of this particular material in this new building reflects and celebrates Skellefteå’s local commerce; every piece of wood here has been locally sourced and selected with the surrounding populations in mind. As Norelius explains: “We need to bring people closer to the urban project, and involve them in the process.”

The success of this sizeable construction demonstrates that a complex wooden multi-purpose building does not imply a compromise on spatial qualities. New types of engineered timber that are considerably stronger and more stable than regular wood are now an option in a much wider range of projects across the world, making timber skyscrapers – or “plyscrapers” – a real prospect. Cross-Laminated Timber (CLT) is produced by layering glued timber sections at right angles and this can be prefabricated in a factory to any shape or dimension. CLT is also much lighter than both steel and concrete and takes half the time to construct.

With climate change now the main consideration of any new architectural endeavour, hybrids are quickly becoming materials of choice. Despite their reliability and durability, the production of steel and concrete is hugely energy-demanding and they each have significant carbon footprints. The ever-growing populations in swollen cities mean there’s now more demand than ever for housing in dense urban areas and a safe yet environmentally friendly alternative is needed. Of course, these raw materials are entirely natural but architects have had to invent ways to manipulate the organic form to ensure a stronger, more durable and fire-resistant variant. Most successful buildings so far have involved steel enhancement, which has eased worries over fire hazards and therefore excessive insurance costs. As Norelius confirms: “The introduction of wood on a larger-scale allows us to shape a construction industry to complement the heavier materials, suited not only to efficient and low-cost construction, but also buildings and spaces for people.”

Our archaic loyalty to concrete is being challenged by such contemporary alternatives due to the wasteful and inefficient nature of the mixing process. From the very beginning, creating concrete entails excessive water waste and, once the material has served its function, the used product is very difficult to dispose of. In contrast, when wooden materials need to be deconstructed they are often repurposed or recycled into new products. Compared to concrete, timber has not previously been considered suitable for creating general spaces for flexible use, but it now opens up the possibility of changing and developing buildings in the future. Robert Schmitz, another of White Arkitekter’s luminaries, explains: “The life-span of a domestic or urban space is no longer defined by the durability of the structure, but by its ability to adapt to changing needs.”

It has been suggested that the age-old flair for wooden construction methods is largely due to Sweden’s essential pragmatism during the country’s notorious freezing winters. Historically, the ready availability of quality trees in Sweden meant it was the low-cost material of choice for housing, which might explain this long tradition in Sweden’s construction sector. More recently, the favouring of wood by architectural practices has also been linked to Sweden’s tradition of dedicated, fervent environmental activism.

Sweden was the first of the Scandinavian countries to change building regulations to favour wood in 1994, which previously prohibited the construction of these types of houses with more than two floors. In 2010 Finland also changed its building code, meaning that structures could reach up to eight storeys for the first time. The 2015 Finlandia Prize-winning Puukuokka apartment block is the tallest of its kind in the country; an all-CLT structure covered in a fire-resistant coating. Similarly, fire regulations have previously limited the use of wood as a material in large-scale constructions but now these rules have eased and we are seeing a booming new construction sector. In 2004 a national strategy was implemented, which strives to support innovation and experimentation within the field. This manifesto stipulates that wood should be a self-evident material alternative in all buildings in Sweden within 10 to 15 years. Objectives of this new strategy include the creation of different types of wood (therefore increasing competition in the market); developing more jobs in the timber industry; keeping carbon dioxide emissions to a minimum by avoiding the use of concrete and steel; and encouraging unique types of treated materials to be brought to the market. Unlike other countries in Europe, this demonstrates Sweden’s unique form of cooperation between the public sector, industry and academics, all of whom are striving for the same goal in architectural innovation. Norelius states: “Building in timber generates new questions that have to be resolved, but it also brings inherent answers to questions that we have been confronted with when working with other types of materials in the past.”

Architectural practices in Sweden have sparked what has been called “the timber age”, which is now revolutionising methods across the globe. Similar projects in innovative urban development are taking place in the UK and beyond. White Arkitekter have undertaken a project in the Faroe Islands called The Eyes of Runavik, the winner of Nordic Built Cities in the Vertical Challenge category, 2016. This three-storey vision will be created using timber construction and even local sheep wool so that residents can keep emissions to a bare minimum over a long period. In 2015 London firm Hawkins Brown completed a 33-metre-high apartment block in Shoreditch named The Cube. The 10-storey residential block was constructed using a hybrid structure that is primarily CLT but also integrates steel elements and a reinforced-concrete core. East London architect firm Waugh Thistleton’s new Dalston Lane project uses timber in high-density urban housing and is putting East London firmly on the map as a world leader in timber construction. The 121-unit residential development (currently under construction) is made entirely of CLT and weighs a fifth of a concrete building of the same size, reducing the number of deliveries during its erection by 80 percent. Such groundbreaking use of technology and innovation has significantly reduced the carbon footprint of the building in terms of material production, on-site time and energy consumption.

Thanks to Sweden’s steadfast dedication to low-emission architectural innovation and courageous experimentation, firms across the world are now factoring timber into their visions of the future. Priorities have changed from grand, artistic statements to an emphasis on practicality, ultimately to increase longevity: through agility as well as strength. Schmitz concludes: “Apart from the impact that construction has on the climate, it affects how we live. Our vision is to have people as the focus, inspiring a sustainable way of life. We at White Arkitekter measure our success by the quality of our projects and ultimately through the difference we make for people by creating emotive architecture.” 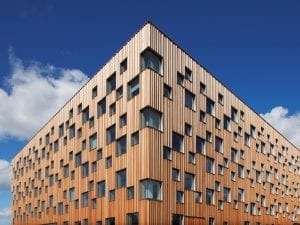 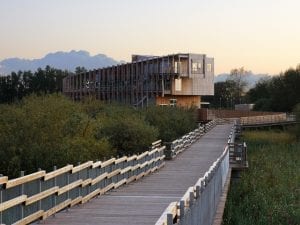 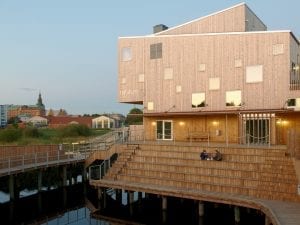 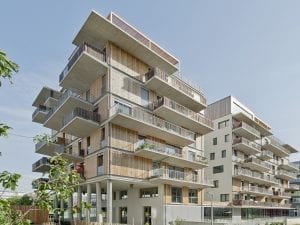 The Vitra Design Museum presents an alternative to an increasingly urbanised society where affordable housing seems like an unattainable idea. 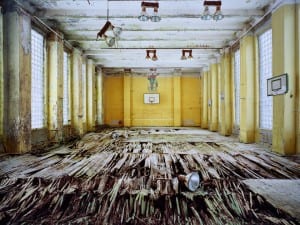 bulthaup designs are built to be more than simply functional; Aesthetica has handpicked 5 favourite bulthaup living spaces for today.