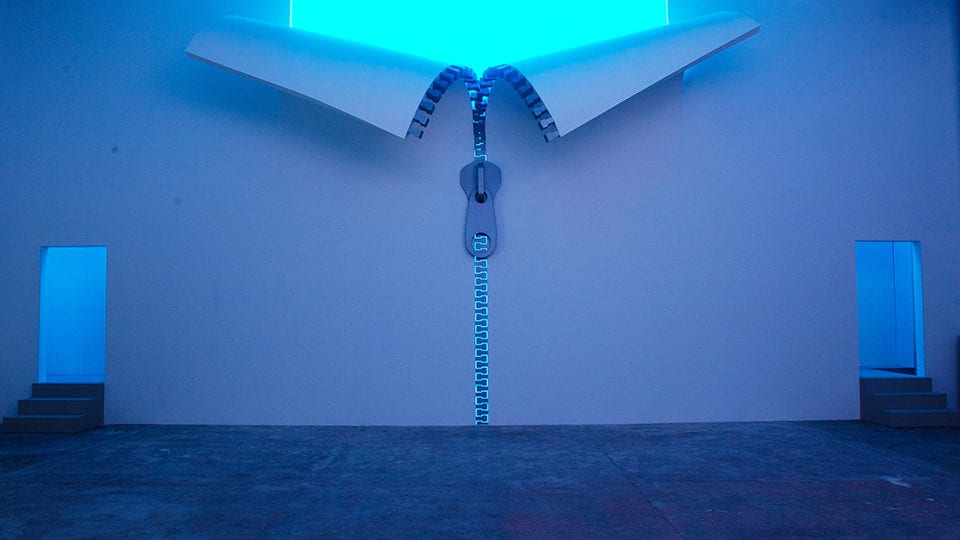 Sculpture’s new talents consider the boundaries of the medium and its environmental impact, working with data and electricity, metal and sound.

Marcel Duchamp’s (1887-1968) brilliantly absurd Fountain (1917) forever changed the definition of art through found materials. Over the next century, Louise Bourgeois (1911-2010) expressed childhood traumas and sexuality on a grand scale with Cell (Eyes and Mirrors) (1989-1993) and giant steel spider Maman (1999). Light and space practitioners like Robert Irwin (b. 1928) and James Turrell (b. 1943) challenge how we see and perceive. Mona Hatoum (b. 1952) questions the inequities behind her own outsider status as the exiled daughter of Palestinian refugees. In Light Sentence (1992), walls of industrial wire mesh lockers and a single moving lightbulb create staggering geometric shadows.

Gallerist Kurt Beers (BEERS London) selects contemporary sculptors that are carrying the same torch of radical change, confronting concepts with renewed audacity. He’s the author of 100 Sculptors of Tomorrow, released this September by Thames & Hudson. In perusing the pages and their lush photo spreads, it is clear that the definition of sculpture has evolved dramatically in recent decades, including works that play with intangible concepts: what we cannot see or hear.

Jonathan Schipper, for example, turns time into an artistic muse. Cubicle (2016) comprises an orchestrated office space. Various mundane objects – such as printers, scanners and keyboards – are attached to strings, running through a hole in the wall. The strings pull the items at a rate of one millimetre per hour, until they meet their inevitable demise. Similarly, a drum set – built out of drywall and reclaimed hardware – slowly crumbles whilst played in Scott Carter’s 16th on Center (2012). These projects highlight the fragility of materials, alluding to the impact of human destruction.

Philippe Allard has been wholly inspired by land art, specifically Robert Smithson’s seminal Spiral Jetty (1970) which involved moving thousands of tonnes of basalt rocks. However, instead of turning to the natural world, Allard manipulates the urban landscape for dystopian creations that foreground humanity’s impact on our surroundings. For Parasitings (2014), masses of yellow buckets pour out of the windows of an abandoned brick building in Montreal; endless and senseless protrusions that disrupt and upend commuters’ expectations and day-to-day journeys.

Beers provides a platform for some of the most promising emerging and even largely unknown sculptors to reach a wider audience. In doing so, the publication takes a broad view of “sculpture” beyond three-dimensionality. It’s one that includes the likes of Emanuel Tovar or Donna Huanca, for whom performance is a moving structure. A violinist uses a handsaw to play the instrument in Tovar’s A Groove in the Nothingness (2016), where the violin pieces represent creation, destruction, death and, ultimately, beauty.

Critics, art historians and advisers, such as Hammer Museum Senior Curator Anne Ellegood and Artforum Editor David Huber, formed a jury that chose around 50 practitioners. The other half came from more than 4,000 people who applied through an open call. In all, 59 men, 38 women and three non-binary artists born in 38 countries are featured. It’s a follow-up to another book Beers put together in 2014, 100 Painters of Tomorrow. Next in line is photography, including artists that consider the pervasive use of new technologies.

Creating this book, Beers expands, made him “fall in love with sculpture all over again.” Throughout the process, he points to the ingenious ways in which practitioners are tackling the most pressing issues of our time, including manmade environmental destruction. Rachael Champion produces idealised miniature ecosystems. Rachel Pimm plays with the idea of the natural world through overtly artificial forms – films, mock-anthropological displays, screen-printed banners and assemblages. Green polyurethane foam, neon and towel construct almost playground-like structures.

Artists like Rushdi Anwar, Kader Attia and Tuan Andrew Nguyen address trauma and the multi-layered, complex nature of identities in a globalised world. Anwar, who has worked in refugee camps in the Kurdistan region of Iraq, manipulates a variety of materials, finding common threads that link people of varying backgrounds. Art may not suffice to stop violence, he says, but “it is a powerful tool as a platform to generate awareness, courage and empathy.”

Olaniyi R. Akindiya and Hiromi Tango are also amongst those taking an artist–activist approach to societal concerns. The healing potential of the creative process is central to Tango’s practice, which often involves large textile structures. Akindiya’s huge freestanding, net-like structures incorporate video, photography, sound and performance. They rely on audience participation. He has also formed the non-profit group ARTWITHAKIRASH, which provides financial aid to children in Nigeria, through community development.

These groundbreaking approaches are part of what Beers dubs a “new renaissance” in sculpture. The text provides a bridge to key leading art fairs or festivals such as the Venice Biennale, Art Basel, FIAC, Frieze, Biennale of Sydney, Whitney Biennial and Echigo-Tsumari Art Triennial. As social media platforms change how artists are being recognised and activists challenge museums’ sources of funding, fairs and biennials play a critical role in determining current artistic output. For its inaugural edition, Yorkshire Sculpture International (open until 29 September) has invited Phyllida Barlow CBE to be the “provocateur” – asking questions about the “anthropological act” of making objects. Contributions by over 20 artists from 13 countries build upon Yorkshire’s worldwide reputation for sculpture with organisations such as the Henry Moore Institute and The Hepworth. The London Design Festival (LDF), which returns 14 to 22 September, drew more than half a million visitors in 2018. Each edition sits at the intersection of design, sculpture and architecture, introducing such critical pieces as Zaha Hadid’s polished concrete Urban Nebula (2007), Jaime Hayón’s giant The Tournament (2009) chessboard in Trafalgar Square or the curving tube that was Alison Brooks’ The Smile (2016).

Subversion is key for Alex Chinneck, who was commissioned for LDF 2015 and also appears in 100 Sculptors of Tomorrow. The artist makes a habit out of turning objects’ physical properties. In an installation for the seaside town of Margate, entitled From the knees of my nose to the belly of my toes, the façade of a derelict four-storey house curves outward and appears to melt into the pavement. In another surprising illusion – ironically titled A Spoonful of Sunrise – a giant zipper on a building causes the concrete to fold over like cloth, revealing a blank lit interior that mimics the changing hues of the sky. In the Middle of Nowhere is a similar piece, which unzips an installation to reveal a glowing source of light. Chinneck, who Beers describes as “something of a magician,” has also caused buildings to float, bricks to melt and grandfather clocks to tie into a single knot.

Rachel Ara, who won the Aesthetica Art Prize in 2016 with the groundbreaking piece This Much I’m Worth (The Self-Evaluating Artwork), makes the cut here for capitalising on “her frustration with the hidden issues and agendas of the modern world to disclose, confront and create dialogues around misinformation, conspiracies of silence, the normalisation of violence, injustice and the economy.” That same digital sculpture displays its own value in real time in a neon doomsday clock-like structure. Her background in the tech industry allows Ara to use data and complex algorithms to come up with the numbers, which also draw on the work’s social media footprint and real-life reactions. It’s a tongue-in-cheek critique of the art world’s obsession with the bottom line and the inequalities faced by women, as well as neon’s prevalence in the sex trade. A V&A Artist in Residence, Ara has also been featured in the Financial Times, and will be exhibiting at LDF and Copenhagen’s Ok Corral, after appearing in the Vienna Biennale and at Seoul’s National Museum of Modern and Contemporary Art.

Haroon Mirza works predominantly with electricity and sound. This July, he received an Honorary Doctorate from University of the Arts London alongside Aesthetica Director Cherie Federico, amongst other world-renowned designers and practitioners. A disconcerting buzz of electrical currents often sets the scene for Mirza’s sculptures. Straddling the digital and analogue divide, he uses objects like turntables and speakers, photovoltaic panels, video and LED lights – referencing his years as a DJ. Since April 2018, Stone Circle has been on view in the high desert grasslands of Marfa, Texas, where it has been billed as the “most ambitious” public commission since Elmgreen & Dragset’s Prada Marfa (2005). Eight black marble boulders arranged in a circular pattern reminiscent of ancient megaliths produce electronic sound and light sourced from solar panels. A “mother” stone that sits outside the formation has a separate set of arrays that charge batteries, which in turn power a sound and light composition activated during each full moon. The piece is the second in Mirza’s Solar Symphonies series.

Artists like Mark Whalen and Troika were picked based on their arresting social media posts on Instagram and other platforms that are subverting the traditional gallery space. Troika, a trio consisting of Eva Rucki, Conny Freyer and Sebastien Noel, create seemingly impossible installations often based on complex mathematical systems. Their Dark Matter (2014) takes on three different shapes based on the viewer’s perspective. The black flock piece at times appears to be a circle, a square or a hexagon. In this way, the artist collective says it probes “the coalescence of seemingly irreconcilable opposites – nature and technology, the virtual and the real, the human and the non-human.”

Ultimately, Beers says, the book is about “opening a dialogue” and “challenging what is traditionally considered to be sculpture.” For readers, this is about idea generation, sharing in global discussions about what art can be and who gets to decide. As Beers continues: “I remember the first time I saw a piece by David Altmejd in the flesh, my skin tingled, my hair rose – a wicked smile crossed my face.” With releases like 100 Sculptors of Tomorrow and major events like London Design Festival and Yorkshire Sculpture International, 2019 is an exciting year for discovery and artistic inspiration.

100 Sculptors of Tomorrow is published by Thames & Hudson. 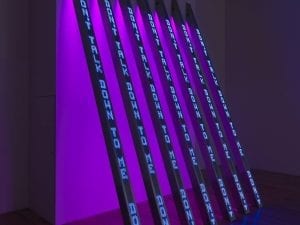 For over four decades, Jenny Holzer’s impulse has been to investigate the authority of language. Tate Modern celebrate the poignancy of this intent. 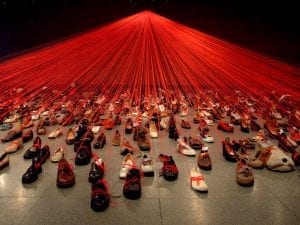 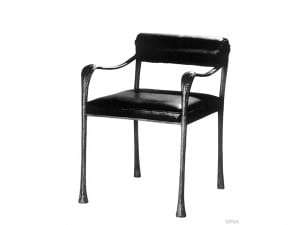 Often described as a “furniture sculptor,” Philippe Anthonioz’s work appeared in a dual exhibition at Galerie Tino Zervudachi in Paris and at Lefevre Fine Art in London.