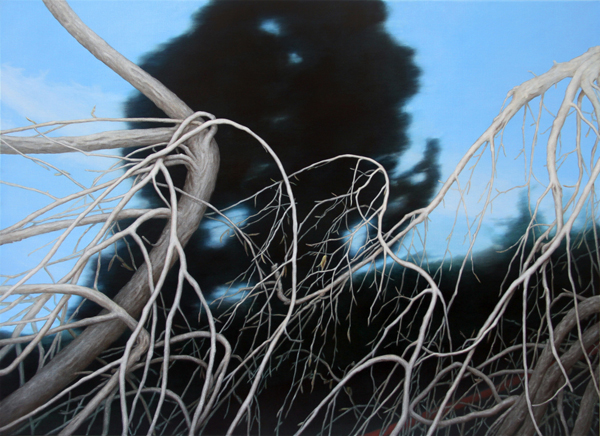 Dark shadows, contrasting colours, smooth and ruptured textures fill the works created by artist Andrew Browne (b. 1960) in his latest series Glimpse, which is currently on display at Martin Browne Contemporary. Glimpse showcases a selection of Brown’s work, which at first appears to be hyperreal photographic snapshots that are in fact oil paintings of recognisable natural scenes. Components within the works appear slightly out of place suggestive of a resistance towards the surrounding environment.

Browne’s practice involves multiple mediums, which include drawing, digital, photogravure, intaglio and lithography. A regular traveller, he photographs hundreds of shots that are carefully narrowed down until the remainder hold a particular sought out mood; these then undergo a process of intuitive selection. Browne reflects: “With this group I wanted the images to be fairly dynamic, (I did some thumb nail drawings of images dissected by lines and flares of light – as if the landscape ‘glimpsed’ in transit) and to evoke movement and transition – so diagonals pop up in various parts, some blurring of form, and a layering of various information, at times to jarring effect (much as we all experience moving through various places).” Making work is quite variable with some taking a few days to complete and others that are commenced quickly and fine tuned over a span of several weeks. At times, Browne will work on a painting at up to 80 percent finished and he will then put it aside and return to it at a later date.

A challenge for Browne is: “Avoiding boredom – seriously.” He continues: “Though my work has developed reasonably logically I think, there are times when I may drop a particular approach or group of symbols and try to renew my practise – a hiccup – this can happen within/during groups of works, so there are may be abrupt juxtapositions.” Paintings may veer from complex to simple forms as something unexpected may suddenly occur which changes the direction. “Sometimes I start with a vague sense and ditch it for something quite concrete – sometimes a nagging image opens up a whole new approach. Intuition sets me on a particular path, then I accumulate material or edit what I have around that.”

The paintings featured in Glimpse involve elements that have carried throughout Browne’s practice from the past two to three decades. He explains that a key interest is in: “…The formal characteristics of image making, generally ‘form’ from the real world but somewhat abstracted and refined…intended to draw out both the psychological and associative.” Landscape is a prominent feature: “Landscape also, both as space but also as something similar to a stage set – a place to arrange or at times ‘collide’ together various disparate forms – whether branches, architecture, natural and contrived light…” These paintings deliver a plentiful mix of interpretations. Eyes are quick to follow the staggering branches that suddenly jolt into spasmodic directions bringing attention to other areas of the work. Most notably, the lighting brings to each piece warm yet conflicting moods. In Dusk in transit (2015), a blue sky hovers brightly over limitless black spaces with climbing branches that seem to hover and could easily be imagined as moving gently. This piece is inviting however with its cool and calming colours it lingers with a feeling of uncertainty. Browne’s paintings hold anthropomorphic qualities and can be perceived as beings or characters moving through their visually appealing environments.

To see the variety of paintings displayed in Glimpse is a beautiful and enriching experience. Browne’s applied techniques generate an assortment of feelings leaving plenty for the imagination. He expresses: “I hope my work encourages sensitivity to the lived and experienced world, and an ability to find poetic resonance in the everyday.” Browne’s ability to highlight the beauty in the natural world may cause us to notice this just a little more as we go day by day in our travels. 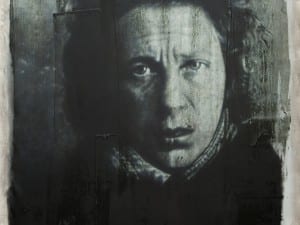 John Keane was announced as the winner of the Main Prize and rising star Suzanne Mooney took home the Student Prize at the Aesthetica Art Prize 2015 exhibition preview at York St Mary’s.

Patricia Casey works with photography and embroidery to make complex images that explore inner worlds with her series, Little Secrets. Casey believes that we all have an inner core that we do not reveal to even those with whom we are closest. 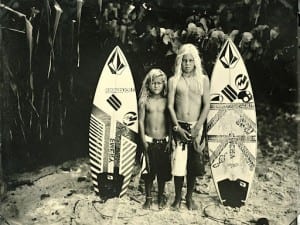